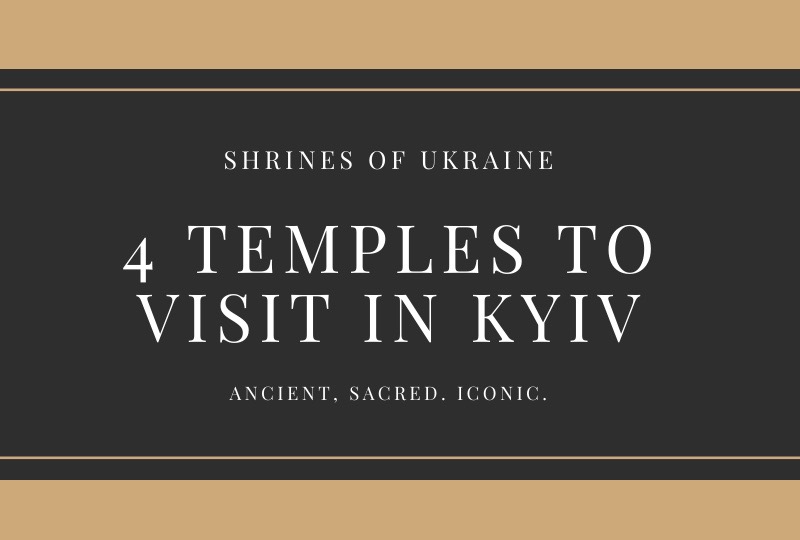 Kyiv is a city with more than a thousand years of history. By the 11th century, it was one of the largest and prosperous centers of civilization in the Eastern Christian world. At that time, there were about 400 churches, 8 markets, and more than 50,000 inhabitants. Thus, as we, Kiev tour guides say – to walk the streets of Kyiv is to walk through layers of history.

There are several temples that are definitely required to visit. Even despite wars and Soviet vandalism, many Orthodox churches have survived throughout the centuries and have undergone many design alterations throughout those times. And as a Kiev private tour guide, I would really like you to get wonderful impressions from exploring the spiritual and religious sights of my beloved city. I have compiled a list of the 4 stunning Orthodox shrines of Kyiv. Check this infographic below. Don’t pick only one temple you like, but try to find the time and see all of them!

Kyiv is a city of ancient temples, various architecture, rich history, and hospitable people. Everybody will be able to find something for themselves here: vibrant cultural life, picturesque parks, beach recreational locations, dynamic nightlife, and flourishing foodie scene. Monuments, sculptures, and ancient buildings are almost everywhere, as the capital of Ukraine is full of landmarks. Travelers who come to Kyiv for the first time mainly start their Kiev city tours with exploring local temples. The glorious religious shrines are definitely one of the main points of interest of the city and the whole of Ukraine.