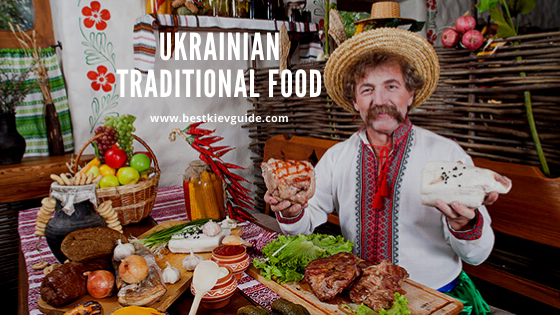 Ukraine has always been known for its hospitality. And what is the best way to show hospitality? Well, of course, set the generous table for dear guests! If you ever happen to be invited to dinner with a Ukrainian family, never miss this opportunity. Trust me! Ukrainian traditional hospitality: tasty, fun, with a twinkle! Superb Ukrainian cuisine is complemented by subtle Ukrainian humor, full of irony and grotesque.

Ukrainian cuisine is diverse, flavorful, and nutritionally valuable. Its development was influenced by geography and climatic conditions, plant cultivation and animal domestication, economic relations with other countries.

The culture of Ukrainian cuisine grew essentially on the ground of people’s activities, hard-working lifestyle, and the factors of the natural environment. Thus, a special peculiarity of Ukrainian cuisine is the usage of primarily local products, such as meat, potatoes, mushrooms, vegetables, berries, and herbs. Meat plays an important role in Ukrainian cuisine. The most favorite is the pork meat, but also beef and mutton, poultry, and rabbit’s meat are widely used in national dishes.

It is important to note that the meal in Ukraine is cooked from fresh ingredients and ideally with fresh spices. Commonly, Ukrainian cooks, as well as housewives, use in the kitchen such spices as mustard, horseradish, dill, parsley.

Indulge in the Ukrainian cuisine on a delicious Private Kyiv Food Tour! Visit the spots frequently visited by locals and discover flavourful dishes led by your local Kiev tour guide.

Alcoholic drinks are served with food in Ukraine and here “gorilka” (Ukrainian vodka) plays an important role. It is considered a universal drink because it is suitable for any event and feast. A heart-warming friendly conversation, whether it’s a business lunch or a family holiday. But it goes especially well with loyal friends and with the right snack. Who else knows this better than the hospitable Ukrainian! Ukrainians make horilka in a special way – with herbs, honey, or fruits – then this kind of alcoholic drink is called “nalyvka”, horilka made with the honey is called “medovukha”.

When it comes to beverages, Ukrainians go for tea, coffee; “kvas” – a fermented drink made from black rye or rye bread, it contains up to 1,2% of alcohol though it is not considered an alcoholic beverage; “compot” – a soft drink based on berries or fruit. Different kinds of fruit juices are popular as well. Also, traditional for Ukraine is the self-squeezed fruit juices, made from their own fruit harvest.

Bread on the table – God in the house

For Ukrainians, bread is not only a material thing, but it is also a shrine, an object of worship, a talisman, a sacrificial meal, or even the deity itself. The bread is kissed, people meet honored guests with bread and salt, it is associated with well-being, in the Ukrainian language, the words “zhyty” (to live) and “zhyto” (rye) have a common root.
In 1848, while in Ukraine, the French writer Honore de Balzac wrote in a letter to Mrs. Shirkovich: “… when you come to Ukraine, this earthly paradise, where I have noticed 77 ways of making bread..”

So, now you definitely know where your next trip should be, right?!
BEST KYIV GUIDE

1 thought on “Ukrainian Traditional Food: Tasty, Fun, with a Twinkle!”