Kiev metro was opened in 1960 and became the third one after Moscow and St.Petersburg in the USSR. It connects the right and the left banks and it is, by right, the quickest transport in the city. For example, it takes me only 10 minutes to get from the station “Livoberezhna” (I leave in the Left bank) to the station “Khreschatik”. So, 10 minutes – and I am on the main street in the city! This is a direct line (the red one on the metro map) to the right bank and you do not need to interchange to get to the city center.

So, Kiev subway consists of three working lines – red, green and blue, 52 stations with 3 interchange nodes. They are:

Kiev metro starts working from 5.30 a.m. till 24.00.
To pass the gates you need to buy a token. The cost of a single trip = one token is 8 UAH, regardless of the duration of the trip. You may purchase it either at the ticket desk or at automatic machines, issuing tokens.

There are also special terminals that accept «MasterCard» credit cards, as well as other devices with the support of «MasterCard PayPass» contactless technology. But they are installed only at 17 stations.

The bus is really a comfortable means of transport in Kiev. They are big, well-equipped and fast. New good-looking yellow buses started to appear in Kiev when the city was hosting EURO 2012. For today, the entire Kiev bus park is renewed. The cost of a single trip is 8 UAH, regardless of the duration of the trip. You may buy a ticket from a bus conductor or from a driver if there is no conductor on the route. Always punch your ticket or else it will be considered invalid in case of inspector’s checkup. You will have to pay the fine, which is 80 UAH if you haven’t punched the ticket.

There are also 6 Express Bus routes. On these routes, buses make fewer stops, only at some main stations. This allows to pass the route and to get to the destination much faster.
Working hours, in general, are from 5.25 a.m. till 10.00 p.m. But they are quite different at different routes. Some start at 6 a.m, some start at 8 a.m. 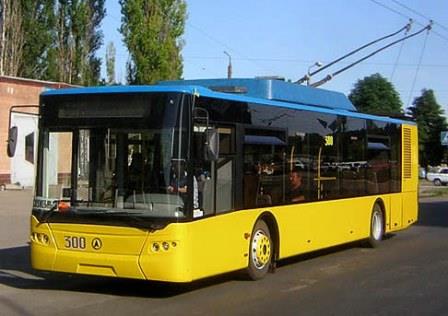 Kiev trolleys allow you to get to almost any part of Kiev from early morning until late evening. The small speed of moving of this type of transport allows you to fully enjoy the view outside the window. The trolley park has been significantly updated and this process continues nowadays. Working hours are from 6:00 a.m. till 10:00 p.m, more precise time and frequency of a particular route you can find on the information boards at bus stops. The cost of a single trip is 8 UAH, regardless of the duration of the trip. You may buy a ticket from a bus conductor or from a driver if there is no conductor on the route.

It should be noted that the majority of trolleys in the daytime, as well as all – early in the morning and in the evening after a 7-8 pm, are working without a conductor. Tickets can be purchased from the driver during stops. And don’t forget to immediately punch the ticket – without mark punch, it is considered invalid, the penalty for ticketless travel (or not punched the ticket) is 80 UAH. 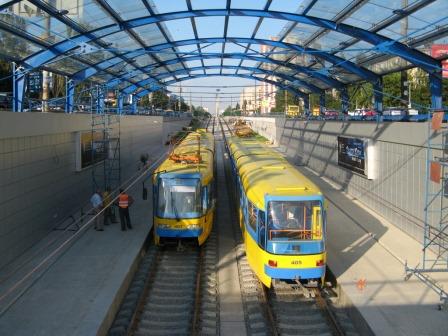 Tram routes are functioning on both banks of Kiev city. But the rails of the tram lines are not interconnected, i.e. there is no route that allows you to reach from the left bank of the Dnipro river to the right bank and vice versa. Kiev tram system is mainly concentrated in the sleeping areas of Kiev and small sections of tram tracks are located closer to the central part of the capital of Ukraine. The main routes are functioning to eliminate the extra load to the other kinds of public transport in districts, where the subway doesn’t function and to help people quickly get to the nearest metro station.

Those Kiev trams, which go in the morning in the direction of a subway, start working at 5.40 a.m. Their last route they usually perform at 24.00 at night. The interval between trams is, on average, 5-10 minutes and it can vary depending on the situation on Kyiv roads, weather conditions, time of day and number of the route. Time of the stop at the station is, approximately, 15-30 seconds.

You may pay for a trip on the tram using a regular ticket, which allows making a single trip on any of the three kinds of public transport in Kiev (tram, trolley, bus). Ticket’s price is 8 UAH. You may buy them at the tram stops, from the conductor or a tram driver.

You will never see anywhere in the whole world such kind of city transport as “marshrutka”. In other words, it is called – Kiev route taxi. It is a very popular kind of transport in Kiev because these compact minibusses have rather frequent routes and they can quickly take you to any part of the city. The cost of travel is around 6 to 7 UAH, it is different on different routes. Payment for the trip is carried out while entering the minibus directly to the driver. Tickets are not used, the fact of paying to the driver allows you to make a trip, in this case, everything is based on trust. If by any chance you forget to pass the money, the driver may loudly remind you to do that. Being busy driving and watching the traffic, they still manage to control everything 🙂 Marshrutkas do not stop at each bus station, so, be ready to inform the driver in advance and loudly to stop at the station you need.

This type of transport enables to shorten the way and to get quickly from Podil to the Upper Town, as well as to enjoy the scenic view of the Dnieper and the old part of the city. Kiev funicular is an exotic rail transport, which directly connected Podil and the Upper Town in 1905. It was the second funicular in the Russian Empire after Odessa. The ticket price is 8 UAH. Passengers may also pay by bank transfer with the help of payment cards

Kiev city train runs, starting from October 2011. The total route is the ring from Darnitsa station to Darnitsa (and vice versa). The cost of one single trip is 8 UAH. The payment for the travel is carried out by a ticket, a check with a bar code or a token, when the latter is lowered into the turnstile, a check is being printed, which serves as a confirmation of the trip payment. Tickets are available at the ticket desk at the stations. 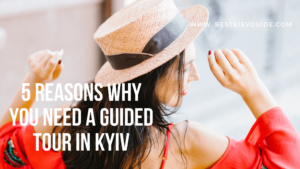