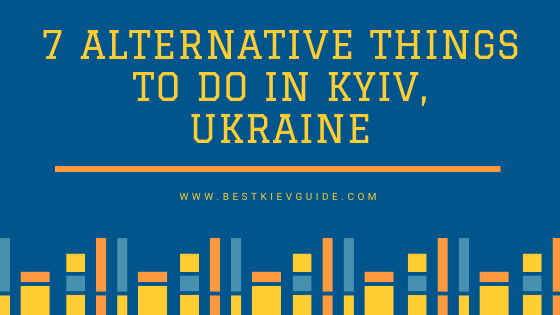 A gem of Eastern Europe, Kyiv is easily one of the most beautiful cities in the region. It has survived the Mongol invasion, Second World War and Nazi occupation, Bolsheviks capture, several revolutions, and yet, Kyiv remain the center of Ukrainian life and culture. In ancient times Kyiv was not inferior to Rome or Athens. The Old Slavic capital of the powerful feudal state – Kievan Rus, by the 11th century, was one of the largest and prosperous centers in Eastern Europe.

Alternative Things to do in Kyiv

Golden domes of the dazzling cathedrals, green parks, various architecture styles, and friendly Kyivans – these are the first things that will strike the eye of a first visiting tourist. But there is also an unknown Kyiv – an off-radar, striking, astonishing, sometimes strange, and incomprehensible.

I would definitely recommend visiting the main and most famous landmarks of Kyiv. The sights that are typically included in 3-hour Old Town Kyiv Tour such as St.Sophia Cathedral, St.Michael’s Golden-Domed Cathedral, Golden Gate, St. Andrew’s Church. But let me also give you some tips on what else to see in Kyiv – alternative from well-known sightseeing monuments.

In this article, I have compiled for you 7 alternative, not typically touristic places that are worth visiting. Save for yourself this list and see the most of the sights already this year! Book a private tour with the Kiev tour guide if you feel uncomfortable looking for the places on your own.

1. Spend a day on the beaches of the Left Bank.

The life on the left bank of Kyiv may seem not that vibrant, busy and posh as on the right bank. It’s slow-paced, calm, unsophisticated. In summer it’s a real pleasure to enjoy the sunny hot days by the water. On weekends Kyivans usually spend time with their families, so that on the new working week they are ready for the new challenges.

There are several lakes on the left bank of Kyiv, and the main beach area – Hydropark with clean beaches, restaurants, sports grounds, various roller coasters for kids, walking zones, and other entertainments. It is possible to rent a boat and flow along the Dnipro river, admiring picturesque landscapes and enjoying a romantic atmosphere. Those who like speed can rent a motor launch or try water skiing.

Traditionally, tourist routes run through the center of Kyiv, and the outskirts remain out of tourists’ sight: it’s widely thought that there is nothing interesting there. But this is not true. There are amazing places even in the sleeping areas and suburbs. Tour guides usually don’t take these routes, but the beauty and history of the places, are worthy of attention.

One of these areas in Kiev is Holosiivo on the southern edge of the city. The best of all would be to start a walk from the area of Holy Protection of Theotokos Holosiivskyi Monastery (Holosiivska Desert, since the 17th century), then have a walk in the Holosiivskyi National Nature Park, and take after that to the Kitaevskaya desert.

Cossack settlement “Mamayeva Sloboda” is situated at the picturesque place near the source of the legendary river of Lybid only 7 km from the central street of Kyiv. Its thematic exhibits are settled on the 9,2 hectares site and represent a full replica of a historical settlement depicting Ukrainian nature, architecture and the way of life.

The estate consists of different buildings according to their household functions. They are storehouses, sheds, stables, cellars, barns, cart-houses, etc. I would recommend you to visit the place on a summer holiday of Ivana Kupala, typically celebrated on July 6 every year. So much fun and entertainment in the Ukrainian traditional way.

4. Workout at the most hardcore Outdoor Gym in the world.

This unique open-air gym was founded in the early 1970s. The equipment, some of which looks more like a torture machine and alien creature, is made mostly from old machinery and scrap metal. We, Kyivans, call it “kachalka”, the name comes from the Ukrainian word ‘kachat’ which literally means ‘to pump’.

For those who come there for the first time, the sight remains in the memory for a long time. It looks like sets for fantastic movies: a post-apocalyptic city in which local gladiators are training on makeshift simulators made from various mechanisms. The equipment is chained to the ground so that it isn’t stolen. Come and pump the iron!

Ukraine has a lot of talented craftsmen, manufactures, and factories that create unique objects in furniture, textiles, carpets, ceramics, wood products, lighting, embroidery, and decorations. And there is one great place where you can purchase a Ukrainian produced souvenir/goods – “Vsi. Svoi“. Some of the goods are really unique and genuine, where ancient traditions are integrated into the modern context.

There are two big shops of “Vsi.Svoi” in the main street of Kyiv – Khreschatyk. And also a “Vsi.Svoi Market” in Desyatynna Str. 12. The Ukrainian brands are represented in a separate thematic group of goods. The theme of the market Vsi Svoi is divided into 4 areas: “Clothes. Footwear, Accessories, Gastronomy, House and Decor. Entrance for market visitors is always free.

There is no other Scythian collection anywhere else like in the Kyiv Historical Treasures Museum.  Here is exhibited the gem of the whole collection – the famous “Golden pectoral” (chest decoration of a Scythian king). The gold pectoral was found in Tovsta Mohyla, a large Scythian royal kurgan, by the archaeologist and poet, Borys Mozolevsky, in 1971.

Combining several eastern and western jewelry technics (casting, filigree, enameling, etc.), this 4th century BC artwork is the best Scythian pectoral ever find. Well balanced and symmetrical, this masterpiece has a diameter of 30,6 cm and a weight in gold of 1150 g. Don’t miss the opportunity to see this amazing ancient masterpiece all with your own eyes in the Museum of Historical Treasures of Ukraine.

7. Visit one of the world’s best Aviation museums.

The Oleg Antonov State Aviation Museum is situated very close to the airport “Kyiv”. This museum, operated by Ukraine’s National Aviation University, houses one of the world’s biggest displays of aviation technology. The majority of the aircraft are ones built by the Soviet Union and exhibits include supersonic bomber planes, transport planes, and nuclear missile carriers.

The museum is included in 20 best aviation museums around the world by CNN travel. I definitely recommend anyone, regardless of gender or age, to visit the Aviation Museum in Kyiv.  Add the fact that it isn’t expensive to enter and is also relatively easy to reach on public transport. The place is also an aspiration for photographers and fans of all things retro.