Like any other major metropolis, Kiev is divided into administrative districts. They are formed by the radial principle and named on a geographical basis. There are ten districts in the Ukrainian capital: three – on the left bank of the Dnieper river and seven – on the right bank. As you know, one of the largest rivers in Europe Dnipro divides the city into two parts: the high and hilly – right bank and the low and flat – left bank. The two parts are connected by seven bridges across the Dnieper river. The more modern left bank area was build during the 2nd half of the XX century. 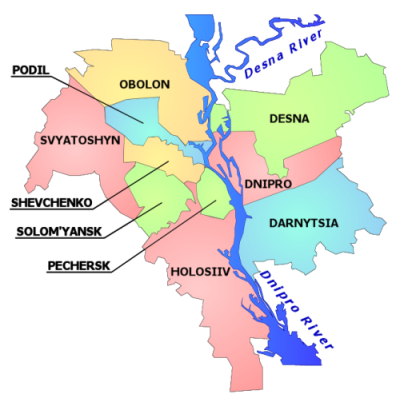 Districts of the right bank of Kiev:

Districts of the left bank of Kiev:

The number of the resident population has reached 2,909,697. At the same time, according to expert estimates, the population of the capital of Ukraine, together with unregistered tenants is about 4 million people.