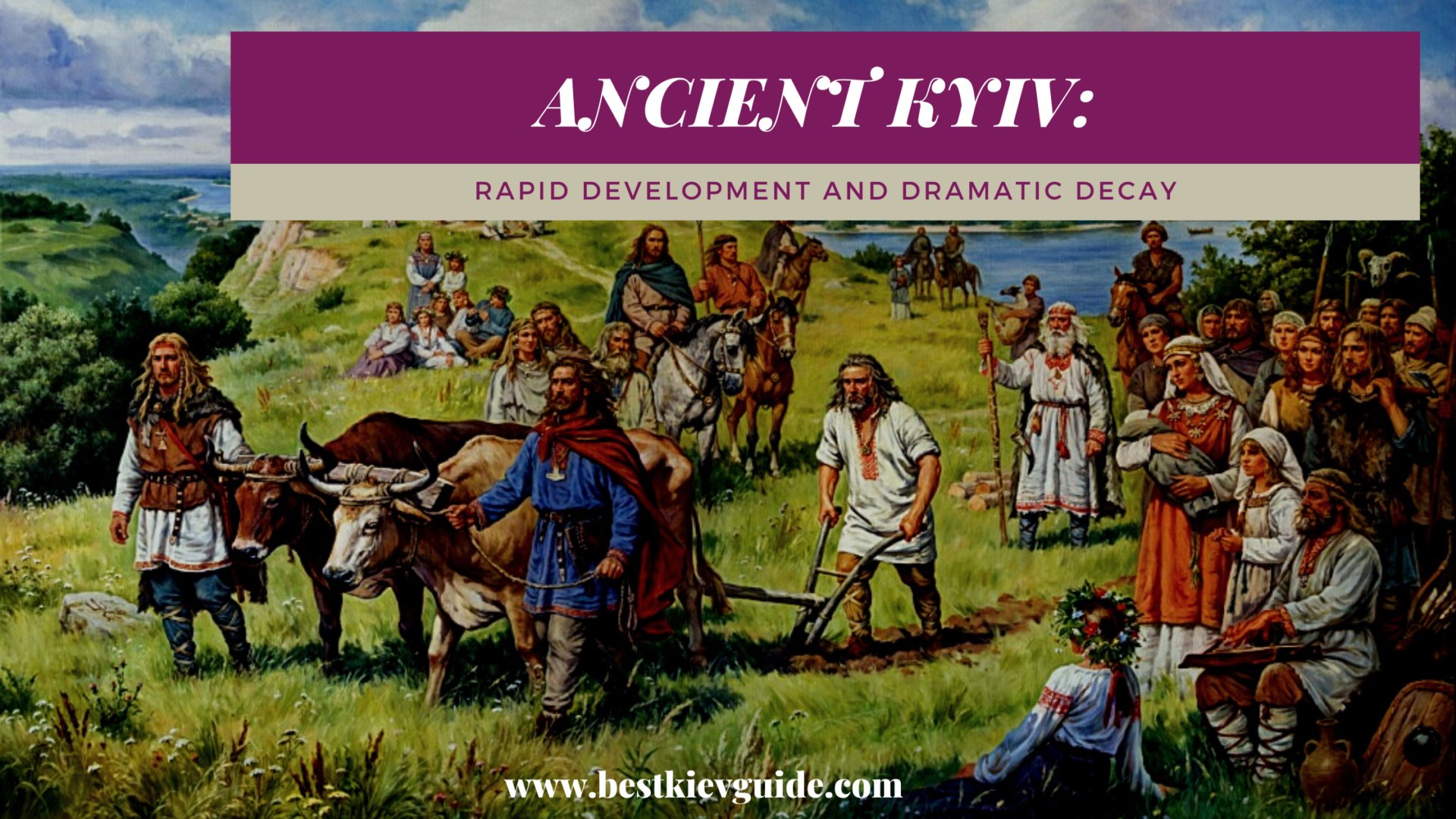 Ukraine is a sovereign, independent, and democratic state with a rule of law. Ukraine proclaimed its independence from the Soviet Union in 1991. And this year we will celebrate our 30th birthday anniversary. Sounds like quite a young state doesn’t it. Although while speaking about the Ukrainian capital – Kyiv, we can relate to more ancient times.

The first urban settlements on the territory of modern Kyiv appeared in the 5th century A.D. East Slavic tribal union “polyane” moved from the areas of the Danube river to the Dnipro river. According to the Primary Chronicle of the 12th century “The Tale of Bygone Years”, Kyiv was founded by the 3 brothers Kyi, Schek, Horiv, and their sister Lybid. The eldest brother Kyi was the main leader of the tribal union .

In the 9th century to this land came Oleg – a Scandinavian warrior (half mythological character), his people killed then-ruling leaders Askold and Dir and he became a governor in Kyiv. Prince Oleg started the process of union of Eastern Slavic tribes and principalities into one state. In Primary Chronicles, we can read the phrase that Oleg said right after he became a ruler of Kyiv: “Let this land be a mother of Rus cities”. Prince Oleg forced other principalities including Novgorod to pay tribute to Kyiv. Thus, the years of 811- 830 are considered to be years of the foundation of Kyiv city.

How Kyivans were called “rus” people

The word “Rus” most likely derives from an Old Nordic word – “ruotsi” – for the men who row in a boat, as rowing was the main method of navigating the rivers of Eastern Europe, particularly the Dnipro river. To say more precisely, “Rus” is a Proto-Finnic name for “Sweden”: Ruotsi and Rootsi. That can be linked to the Swedish coastal area of Roslagen or Roden, as it was known in earlier times.

By the 11th century, Kyiv was one of the largest and prosperous centers in Eastern Europe. The wealth and political influence of Kyiv was associated with the trade. Prince Oleg actually continued the business that was started by Kyiv rulers Askold and Dir before his coming. Kyiv stood at the crossroads of the international trade route -” from the Vikings to the Greeks”, that is from the Baltic to Constantinople. The traders had to pay a toll for passing through Kyiv city. This is how Kyiv was included in the world net of trade.

Golden era of Grand Prince of Kyiv Yaroslav the Wise

With the era of the ruling of Grand Prince Yaroslav the Wise (1019-1054), Kyiv city began to flourish even more. Yaroslav the Wise (son of Prince Volodymyr the Great) was a prominent ruler of Ukraine- Rus. He completely defeated the horde of Pechenegs (Turkic nomadic tribes) who constantly made raids on Kyiv, he strengthened the boundaries of the city and built fortifications. Yaroslav the Wise paid much attention to education, literacy, and art.

Prince Yaroslav the Wise issued the first code of laws. He was a great political leader and maintained diplomatic relations with the European states. Ukrainian historians call Yaroslav – father-in-law of Europe. His daughters Alesava, Anna, and Anastasia were married respectively to Harald III of Norway, Henry I of France, and Andrew I of Hungary. Yaroslav the Wise himself was married to a representative of the Northern European dynasty – Princess Ingegerd Olofsdotter, the daughter of the king of Sweden. After his death, his expansion of culture and military might left a powerful impact on Ukraine-Rus history.

Mongol invasion of Kyiv in 1240

The rapid development of Kyiv was stopped by the Mongol invasion in 1240. Kyiv, the once-great city was destroyed and robbed. Of more than 40 monumental structures in Kyiv only 5-6 were saved; of more than 8,000 households only 200 (and those apparently were rebuilt between 1240-1246) were saved, and out of the 50 thousand people remained no more than 2 thousand. Khan Batyi with his thousands army besieged Kyiv and in nine days attacked it.

The 1240s marked a time of internal dissent, destruction, and decay of Ukraine-Rus. For ten next years, Kyiv princes would be in a continual state of war and fierce rivalries as dynasties were fighting to increase the size of their territories.

Hello! My name is Victoria, I am a private tour guide in Kyiv. If you plan a trip to the Ukrainian capital, I would be happy to customize your perfect Kyiv private tour. I can create a private tour of Kyiv on a wide range of topics from ancient times to Soviet-era Kyiv, architecture and street art, and local gastronomy.