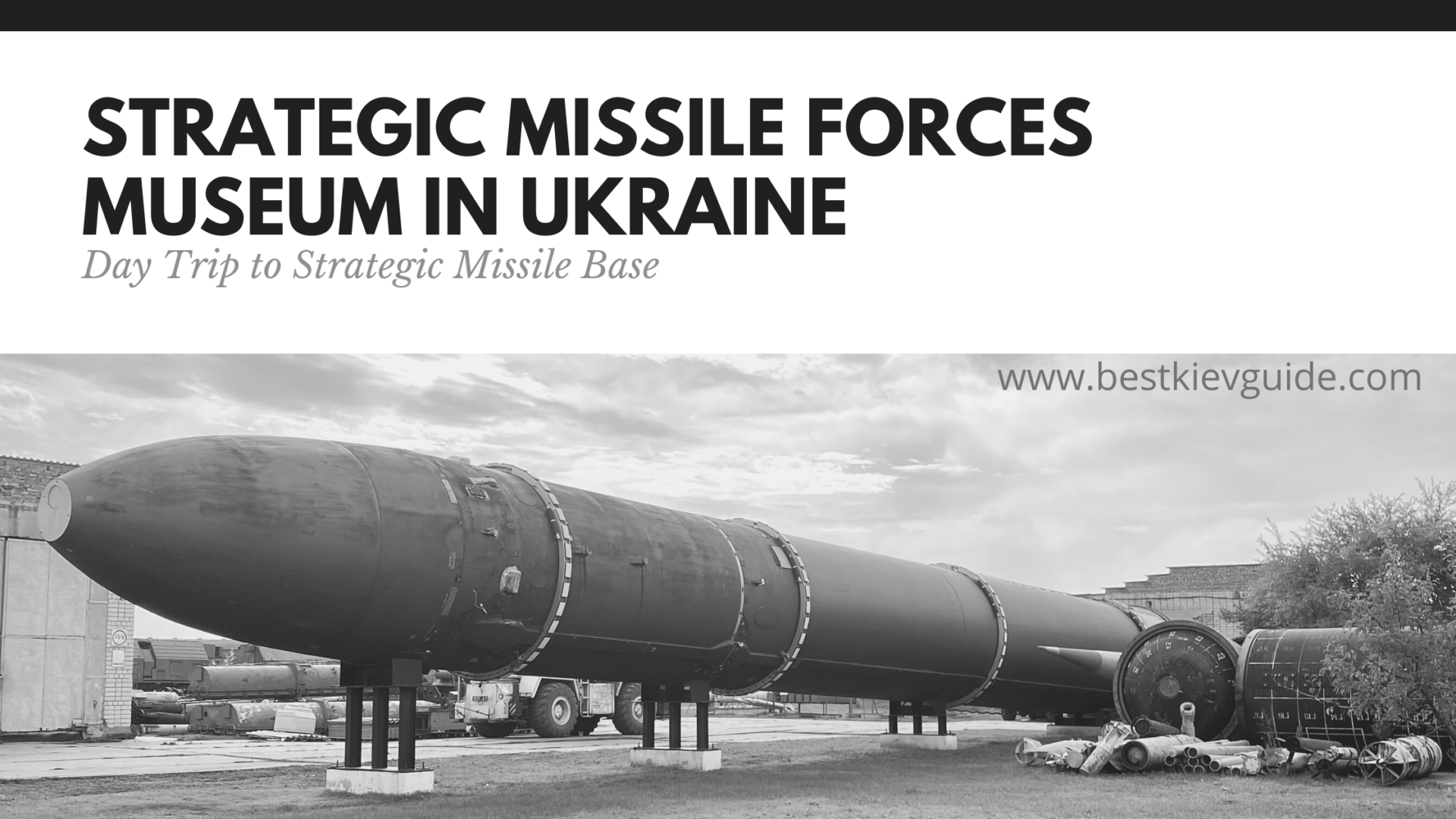 Day Trip to Strategic Missile Base

The unique Strategic Missile Forces Museum is located about 250 km south of Kyiv near the town of Pervomaysk. There is only one similar public museum in the world, the Titan Missile Museum in Arizona.

The Museum of Strategic Missile Forces includes a unified command post, a silo-based missile launcher, and a spectacular outdoor exhibition of weapons from the Soviet past and even Second World War times. Ranging from rocket engine parts, mock warheads, and missiles to military vehicles, helicopters, and trains.

Among them are the missile “Sandal”, the deployment in Cuba in 1962 provoked the Caribbean crisis, and an original R-36 intercontinental ballistic rocket that was given the name “Satan” by NATO. It is partially cut open showing what the missile looks like inside.

The missiles could reach the USA and carried a nuclear charge, that was ten times more powerful than the bombs that had destroyed Hiroshima and Nagasaki.

Of great interest is the exhibit of a sample of the missile SS-18 Satan. Its characteristics are maximum starting weight – 211,4 tons, length – 34,3 meters, diameter – 3.0 meters, the weight of the warhead – 8730 kg, the maximum range – 15000 km, shooting accuracy – 0.5 km. It was capable of carrying ten warheads of 750 kilotons each (the bomb that destroyed Hiroshima was 15KT). However, the SS-18 was never stationed at the base. The silos controlled from this base accommodated medium-range nuclear weapons that could destroy a large part of central Europe.

The highlight of the museum premises is a descent 33 meters underground to the Launch Command Center. Where visitors are allowed to sit in the seat behind the missile launch control panel press the “big red button» if they dare of course. I did!

It is a round metal tube, 3.3 meters in diameter and 125 tons in weight. It is located inside a silo three meters below the ground. There are eleven compartments with everything needed to keep the Unified Command Post running autonomously for up to 45 days in case of a nuclear war.

It is possible to reach the LCC through a tunnel that is connected with the staff building and the engineering bunker. In this tunnel, you will see cables and tubes providing water, electricity, cooling, and communications.

For an additional ticket, you will be allowed to sit in the seat behind the missile launch control panel and simulate part of the missile launch. The main thing is that two persons have to push the launch button simultaneously. Immediately, the lights of the monitors will start flickering and giving an alarm sound indicating combat mode.

I would recommend this trip to all the military topic fans, those who are interested in the Second World War and the Soviet past. It is a unique experience that you can have only in two places in the world, and Ukraine is one of them. The tours are provided by the Ukrainian former military officers who in the past served in this military base. So, you will definitely need an English-speaking guide who will translate for you the tour. As a passionate lover of military and Second World war topics, I would be happy to organize the day trip to the Museum of Strategic Missile Forces for you.

Hello! My name is Victoria, I am a private tour guide in Kyiv. If you plan a trip to the Ukrainian capital I would be happy to customize your perfect Kyiv private tour. I can create a private tour of Kyiv on a wide range of topics.

The requests I receive from my tourists are very diverse, from Ancient Kyiv to Soviet-era Kyiv, architecture and street art, or local gastronomy.