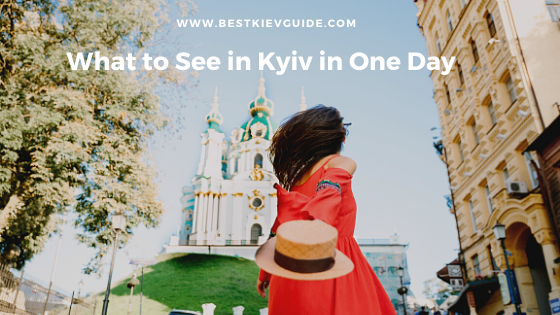 Kyiv in Ukraine is a very diverse city, in any tourist guidebook, you will definitely find a comprehensive list of sights, museums that must be visited. Here everyone can find something for themselves: vibrant cultural life, picturesque parks, beach recreational locations, dynamic nightlife, and flourishing foodie scene.

Keep in mind that Kyiv is a very big city. Its total area is 839 km2. Many landmarks, historical sights, offbeat places as well as bars and restaurants are scattered all around the city. Thus, visiting Kyiv requires a bit of preparation and planning in advance.

Private tour guide in Kiev – Victoria BEST KYIV GUIDE gives insider tips on how to spend one day in the capital of Ukraine. If you visit Kyiv in a short period of time and want to see the most essential sights and local attractions this article will certainly help you.

Map for Spending a Day in Kyiv

Here’s a map of the attractions to give you an idea of how it all fits together. The violet pins on this map are sites of the Old Town area, the blue pins – of the Upper Town. There is also the third layer with red markers for food and drink stops. You can see the full version of this map here on Google Maps.

One Day in Kyiv Itinerary

The very first thing that strikes tourists is that Kyiv is built on entirely another visual scheme than traditional European cities. The Ukrainian capital has a slopy terrain on the right bank and there are more than a dozen descents. When planning a walking route, it is necessary to take into account altitude changes, which can be very significant. So think of comfortable footwear and leave heavy luggage in the storage room.

There are 3 historically valuable areas of the city:

It is better to start with the spiritual heart of Kyiv – Old Town which is very rich in ancient temples. The glorious religious shrines are definitely one of the main attractions of the city and all of Ukraine.

It is the main triumphal stone entrance to ancient Kyiv and a part of defensive fortification constructed in the 11th century by the Grand Prince Yaroslav the Wise. In the 11th century Kyiv succeeded Byzantine traditions, the same Golden Gate was built in Constantinople. Because there was a prejudice that Jesus Christ would enter the city at the Second Advent through the Golden Gate.

In 1240 the Golden Gate was destroyed by the Mongols. It remained in use as a portal to the city until the middle of the 16th century. The construction that you see now was created based on archeological excavations in the early 1980s. It is included in the UNESCO World Heritage List and functions as a museum.

Just a few meters away, you may see a red, gothic-style building in the form of a medieval castle.

Locals admire the romantic appearance of the building and especially the pair of sculptures on the facade – the winged devils with the hands-wings and feet-claws. The bestial faces look viciously at passers-by.

When the Czech club was inside the mansion, the writer Jaroslav Hašek occasionally looked into this place. There’s a story, once he was a little drunk, quarreled with someone, and cursed the building, its former and future tenants.

Near the Golden Gate, you will see a monument of Grand Prince Yaroslav the Wise. He proudly holds in his hands the miniature of St.Sophia Cathedral. The original cathedral is a 7 min walk from the gate.

That you should visit St.Sophia inside, there is no doubt. It is the most ancient Christian church that is fully preserved since the 11 century in the East Slavic area.

It preserves the most complete in the world ensemble of original mosaics and frescoes of the 11th century – 260 square meters of mosaics and 3000 square meters of frescoes. They are true masterpieces of world art. Be aware that St.Sophia is a UNESCO World Heritage site, it is not functioning as a church, but as a museum. The entrance ticket inside the cathedral cost 80 UAH.

It is an energetically powerful place. Here is a tip from me, if you stand on the spot from where you can see both: Mother of God – Oranta mosaic image in the vault of the main altar and Jesus Almighty image in the cupola right above you, you can make a wish and it will be fulfilled.

Right opposite the Sofiyska Square at a distance of 500 meters is another significant temple of Kyiv and all of Ukraine.

The sky-blue cathedral, with its shining domes, is a remake of the 12-century cathedral destroyed by Soviet authorities. Nowadays, it is a functioning monastery and headquarters of the Metropolitan of the Ukrainian Orthodox Church.

To the right from St.Michael’s Golden-Domed Monastery, you will see a huge grey building – the Ministry of Foreign Affairs. Take a walk along the short street that begins from here and marvel at the real masterpiece of Ukrainian baroque art – St.Andrew’s Church.

It was built in the mid of 18th century on the drawings of the Italian architect Francesco Bartolomeo Rastrelli. The church miraculously survived destruction over 266 years. It owes its origin to the Russian empress Elizabeth who, intending to have a summerhouse in Kyiv, ordered a temple.

At the bottom of the church sprawls a paradise for tourists – a souvenir and craftsmen market. The street often called “Montmartre of Kyiv” is a site of museums, galleries, art workshops, antique and souvenir shops. This is where tourists can always buy Ukrainian souvenirs – figurines, pottery, embroidery, wooden caskets, and other thing made by Ukrainian artisans and craftsmen.

At Andriyivskyy Descent you can make a stop for a lunch in a Ukrainian cuisine restaurant, or a cafe, or a beer pub, wine bar, and then I would suggest you move to the Upper Town area of Kyiv.

Main attractions of the Upper Town:

The fastest way to get to the Upper Town from Old Town is by metro. Go down any street of the Old Town to the main street Khreschatyk and take 1 stop metro ride to Arsenalna station. That’s a great opportunity to experience the ride in the deepest metro station in the world. Isn’t it an exciting plan?

Opened in 1960, Arsenalna metro station is as deep as 105.5 meters (346 ft) in the underground. This is attributed to Kyiv’s geography where the high bank of the Dnipro River rises above the rest of the city.

It s a unique monastery complex, which is included in the UNESCO World Heritage list and is one of the seven wonders of Ukraine. It is the only sacred place in the Eastern Orthodox world that you can experience only in Ukraine. “Pechery” means “caves” and as the name implies, the monastery began from the caves. Some of the monks were true ascetics-devotees as they stayed in the caves till the death, devoting their whole lives to prayers for humanity.

My insider’s tip for you: if you want to visit the entire complex with all the cathedrals, monastery buildings, the Grand Bell Tower, you will need an entrance ticket for 80 UAH.

But if you want to visit only Caves without entering the territory with cathedrals, then entrance tickets are not needed. It is free for everyone. Just take a walk ~ 400 meters ahead of the main entrance to the Lavra complex, and when you see the striped fence barrier on the left, this is the way down to the Caves.

Right near Kyiv-Pechersk Lavra, creating an impressive contrast of religious and military views there is located a memorial complex of the National Museum of the History of Ukraine in the Second World War. All war history enthusiasts are welcome to the large museum occupying over 10 hectares on the slopes of the right bank of the Dnipro river.

Memorial complex of the National Museum of the History of Ukraine in the Second World War (Lavrska St, 24)

This is a great place for those who are interested in WWII history on the Eastern front. I definitely recommend you to visit the museum inside. The numerous exhibition items in 16 halls are placed in chronological order, showing the overall picture of war, describing main battles on the Soviet-German front line, explaining historical reasons, which led to the Second World War.

The external exhibition is represented by numerous units of military equipment (tanks, helicopters, artillery guns, rocket launchers, and other) and fascinating sculptures, which embody the spirit of the brave Ukrainian people fighting Nazi occupants during the Second World War. The dominant of the memorial complex is a 102-meter statue of the Motherland holding a sword and a shield.

For the bravest, I would suggest climbing to the observation deck in the shield. You will admire the beautiful bird’s-eye view of the city. I have done this, and I can say that it is not so difficult. You just have to wear comfortable sports footwear and clothes. They do only two people climbings within one hour. You will be accompanied by a guide, who will instruct you and lead all the way up to the deck, which is two small elevators and two ladders.

How to Get Around Kyiv – Transportation

Kyiv is an easy city to get around. For much of this itinerary, you will be able to travel on foot, and then you can use public transport to get to the Upper Town.

I would suggest a metro. The metro network is easy to use. It consists of three lines – red, green, and blue, 52 stations with 3 interchange nodes. Kyiv subway is contactless. Your metro travel can be paid for with contactless payment bank cards.

You should add Kyiv to your bucket list right now!

Kyiv is big, diverse, and unspoiled by the tourist masses. Without a doubt, it can satisfy the most demanding travelers. Ancient history, authentic various architecture, vibrant food culture, friendly and hospitable citizens. On top of that, Kyiv is a fabulously green city in spring and summer. You can’t walk far without passing through a park.

So start preparing for a wonderful and unforgettable trip to Kyiv. Whether you want to discover it with a private tour guide, or on your own, I can guarantee that you will not regret it! Traveling to the capital of Ukraine can be a real offbeat European adventure, like nowhere else.

Hello! My name is Victoria, I am a private tour guide in Kyiv. If you plan a trip to the Ukrainian capital I would be happy to customize your perfect Kyiv private tour. I can create a private sightseeing tour of Kyiv on a wide range of topics.

Whatever your interests are, from Ancient Kyiv to Soviet-era Kyiv, city architecture and street art, or local gastronomy. Just let me know your ideas and I will design a private guided tour built around a theme of particular interest that you wish to learn more about. I will take great professional care of you, making your visit one to remember.